Bataan Killer Loop (or half loop, in our case) 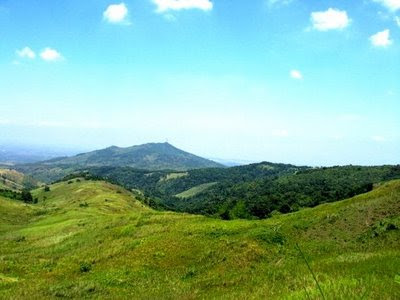 This image on your left is the reward you get as you reach the top of the Bataan Killer Loop Trail. When I saw it I couldn't help but try to whistle the Marlboro theme. Yup, TRY to whistle - that's because I was trying to catch my breath.

So yesterday we finally rode the Bataan Killer Loop trail again after three years. The team for this trip includes Victor Paterno, King Bernas, Mike Tanjangco, Clarence Guerrero, Mike and Megan Ortiz, and me. We took the longer but faster route to Bataan (a.k.a. the newly constructed SCTEX) and parked in the Total gas station just outside the town of Pilar.

The first few kilometers were on the National Highway before we turned left going up to the trail. It was a nice and steady transition as the cemented road slowly gets narrower and narrower until it becomes a double trail leading up the mountain.

The trail was nice and dry. Thank God it didn't rain or it would've been clay. There were ruts in the middle of the trail so one has to learn how to read their way up.

When you get to the top, you'll thank those japanese engineers from Shimano for inventing the 22 x 34 ring-cog combination. If you think about it, the climb wasn't that steep. It was the distance and terrain that differentiates it from your usual weekend ride.

Since we're low on water and the other side wasn't as exciting to ride down, we decided to make it a "killer half-loop" and went down the same way.

Our three hour climb only took twenty minutes to go down, but it was worth it. In this trip, I learned how to use the berms to maintain my speed and avoid the ugly parts.