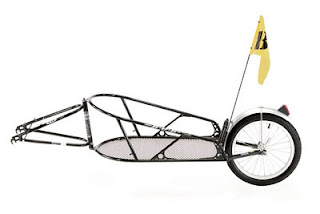 Researching on what's the best way to bring my stuff for the Mindoro bike tour this December, I stumbled upon an old item that's been in my wish list for so long - The Bob bike trailer. I know I just bought a Topeak beamrack and trunk bag

set, but that can only carry a maximum of 20 pounds of gear. Just imagine how easier it would be if you have elbow room for up to 70 pounds? That's the Bob bike trailer.

I researched in Amazon.com as to how much these cost, and discovered that a Bob Ibex bike trailer with suspension

costs $360. That's P15,777 in our currency. Amazon also says that they can only ship this within the US. For its weight, I don't think I can even afford having it brought here anyway. This whole thing weighs 17 pounds. That's equivalent to one lightweight road bike!

Since the nearest dealer is in Taiwan, I came up with this brilliant idea - why don't I just make one with the help of our local fabricators? I looked at the photos on Flickr and watched some videos on YouTube, and it seems very doable.

I posted an inquiry in our egroup, and was surprised to see that I wasn't the only one thinking of doing the same thing. There's this guy who thought of using bamboo while there are three more who are discussing about this.

Then I received an email this morning from Ar Mapagpalaya. Apparently he made the jump and had someone make him one without the suspension. According to him, he used 1" flatbar instead of tubular chromoly and 24 instead of a 16-inch wheel. The whole thing weighed 10 kilograms (22 pounds). He selling it to cover his cost (I don't know yet the reason why he is). I asked him to send pictures. I'll post it here as soon as I get them.
bob trailer fabrication Mindoro trip

Jessica Rossie said…
This comment has been removed by a blog administrator.
4:48 AM

Updates : I just uploaded the new "longer" map. It's now 3.70 kilometers from the original 2.07! You can also view a video of the full loop here . The Heroes Bike Trail is an excellent place to take a break from all the noise and stress of the city. Built inside the Libingan ng mga Bayani, the trail is currently 2.07 2.13 kilometers long (although the guide said that it's 2.4) and expanding. Though short, I find it fun and more presko than Aguinaldo or the Army Trail . I think the Heroes Bike Trail an excellent place for beginners as there are short climbs and fast downhills to learn about mountain biking techniques as well as areas where they can stop and catch their breath. And if ever they need a cold bottle of Gatorade, there's a store by the trailhead. This morning, there was even a person selling taho For foreigners, rejoice! Unlike the previous featured trails in my Biking in Manila series that are located inside Philippine bases, you won't