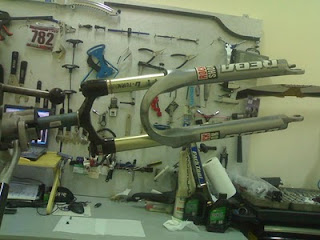 Yesterday was my first time to ride my mountain bike this year after having it serviced at Bikematters in Pasig. I can't tell you how wonderful the feeling is when I put my legs over the bike and started pedaling. It's like I'm back home again - something that's yet to happen with Mike's road bike.

So I waited for almost two weeks for the people from Bikematters to fix my fork. They didn't have the right seals for my Rock Shox Reba in stock so they had to order from the distributor, and that took a long time. In the end they replaced my air seal and dust seal. Together with the labor (P1,500), the whole thing cost me P5,0000. They threw in the general lubing of my bike, free of charge. Nice! The mechanic also gave me a few tips on how to care for my fork, like extending it to its full travel when not in use and lubing the stanchions after having it washed.

So how was it? Can you say "butter"? The fork now works like a dream! After the Mindoro ride, I noticed that it wasn't as smooth as I wanted it to be. After the service, I can now feel that it's working with small bumps as well. I even rode on the rougher sections of the trail to confirm. It felt really good and my arms are thankful.

So will I go back and make them an alternate place to have my bike serviced? Maybe.

I think Bikematters is in the right direction, but there are few items they may want to work on, in my opinion:

1. It would be great if I can set an appointment with them. I called and asked if I can bring my bike to them Saturday morning to have it serviced. When I got there I was a bit disappointed when they told me that I had to leave it with them. My impression was, since I called, they would service my bike at that time. Their reason for this is they don't want to rush things, especially the fork tuning, which is pretty understandable.

2. I really appreciate the updates but it could've been a bit more professional if it wasn't coming from a Chikka messenger. When I checked in my bike, they gave me with their cellphone and landline numbers, but they were coordinating with me using Chikka messenger. On their first SMS, I thought it was a spammer. I know it's cost effective for them, but I hope they realize that their customer is being charged more than the usual amount to reply to these messages.

3. They need to sell more bike components soon. They can do this themselves or partner with a bike shop and make it a satellite outlet. Whatever the decision may be, I'll leave it with the owners. My point is they can't just specialize on repair and leave the sourcing of replacement parts with the hands of the bike owner. It's like a paluto in a dampa without the wet market. It would be great, for example, to be able to choose from an array of cogsets after hearing the news that the one installed in your bike is fried.

4. Maybe they would consider closing a bit late. Their place could be a great tambayan after doing a few laps around Ultra at night. Maybe they can cross sell some products and services.

Want to try out Bikematters?  Here's their address and contact details:

If you've tried out Bikematters, please post your review in the comment box below.
Bike Shop Fork Maintenance

Jovan Puyo said…
Just got a call from Manolet, the owner of Bikematters, and he's got some few updates!

1. They're moving out of their place near Ultra and transferring to somewhere in Gilmore in Greenhills.

2. They'll be a full-pledged bike shop soon! Awesome! It'll be a place where we can all hang-out!

3. They won't be using Chikka messenger for their correspondences. Hehehehe!
1:59 PM