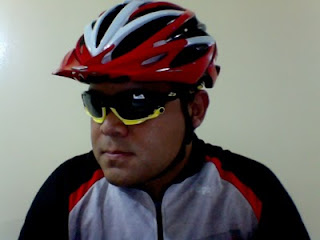 There comes a time in your life where you have to let go of something, no matter how painful this separation may be. After five long years of numerous cycling escapades in and around Manila, I'm retiring my beloved Giro Atmos

helmet. I'm thanking this equipment for being there with me every step of the way. I'm thankful also that it didn't have to sacrifice its life to save mine.

Sadly, helmets have a lifespan. Depending on the manufacturer, after three to five years, helmets need to be put out of commission. Exposure to the elements for that amount of time may compromise its ability to protect one's head in an impact.

Being saved by a Giro helmet once when I was in high school, I was planning to get another one - a Giro Athlon

to be exact, but I guess it wasn't meant to be. The first time, I ordered online through Bike Nashbar, but they said that they cannot ship it to the Johnny Air office in New York. It has to be straight to the Philippines, which costs more. So I scrapped that. The second time, I went to Velo City in Cartimar to get me one, but they don't have the size for the color that I like. 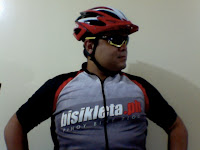 So I got a Bell Volt

instead. It's the same helmet used by Team BMC and Team CSC in last year's Tour de France. What makes it cool is it comes with a visor so I can take it both on and off road.

This is my second Bell helmet. The first one was a Bell Razor with the Reebok Pump system. I got me a red and white one this time, which goes really well with my new Bisikleta.ph jersey. (Pretty soon, I need to get myself a pair of red Oakley Jawbones

What do you think?

By the way, a helmet is only designed to absorb one impact. After that you're supposed to replace it.
Bell Bike Shop helmet Velo City

Updates : I just uploaded the new "longer" map. It's now 3.70 kilometers from the original 2.07! You can also view a video of the full loop here . The Heroes Bike Trail is an excellent place to take a break from all the noise and stress of the city. Built inside the Libingan ng mga Bayani, the trail is currently 2.07 2.13 kilometers long (although the guide said that it's 2.4) and expanding. Though short, I find it fun and more presko than Aguinaldo or the Army Trail . I think the Heroes Bike Trail an excellent place for beginners as there are short climbs and fast downhills to learn about mountain biking techniques as well as areas where they can stop and catch their breath. And if ever they need a cold bottle of Gatorade, there's a store by the trailhead. This morning, there was even a person selling taho For foreigners, rejoice! Unlike the previous featured trails in my Biking in Manila series that are located inside Philippine bases, you won't