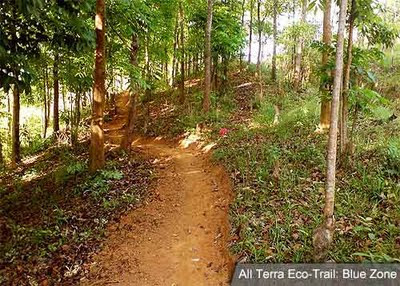 We were intrigued by what we were hearing from the social networks and in the various forums - that they're building a new trail network somewhere in Timberland to rival La Mesa. It was apparently a partnership between the developers of Timberland and the All Terra bike shops. They even imported someone from IMBA to design it.

So last Saturday, like the magi in search for the Child, we went to Timberland in search of the holy trail. We asked the guard at the gate where it was, and his answer was quite cryptic: just follow the bikers.

Armed with only that clue, we geared up and "followed the bikers". We had no choice. That was the direction.

We learned that this was the entrance to the blue trail. Apparently there's a tamer trail, which snakes around the Roxas area. We were too lazy to pedal to that section so we opted for the blue trail instead.

How was it? It was awesome! The trail is quite challenging. It starts with a climb going to the old Yes or No section and ends near the Araneta gate. I think the whole section is less than 7 kilometers. There are climbs, switchbacks and fast downhills with jumps and berms. It will definitely test your mountain bike skills. This trail is definitely not for first timers.

Some notes on those who will try it for the first time:
1. Some of the berms haven't been compacted fully yet so your wheel might sink in it.
2. Avoid tailgating, especially in downhills.
3. Parts of the trail are still quite loose. A tire with lower air pressure might help with traction.
4. There's a section there with a jump right after a fast downhill.

It's free for now but they'll be collecting entrance fees in the future.

Check out the map of the trail below.
Tip: Open it using Google Earth rather than viewing it on Bing.