My Dream for Sale

April 01, 2012
UPDATE (15 April 2013): I'm no longer selling this. Since none of the negotiations pulled through, I took it as a sign that this bike is really for me. I just assembled it last Saturday with a Shimano XT gruppo, a Fox TALAS fork, and Easton Haven components.

Last December, I bought a second-hand mountain bike frame from my bike buddy, Mawie. It was a white, medium-sized Intense Tracer VP - one of my dream bike frames from way before (even at the time when they were still using Specialized's patented Horst link suspension).

I didn't plan it. Mawie just texted and asked if I know anyone who's interested with the frame because he's upgrading to the Tracer 2. I replied back and told him that that has been my dream frame ever since, but I know I couldn't afford it. He replied to me and asked me the payment terms I'm comfortable with. The rest is history.

Mawie's really good with his bikes. Judging from the condition I got the frame, it looked very much as if he only used it a few times before he got bitten by the upgrade bug again (which might actually be what happened). It was bathroom-taped all over, and there were no dents or anything of that sort. If I didn't see him use it in our La Mesa ride with the Batangas boys, I would easily mistake this as brand new.

My plan is actually pretty straightforward: slowly build it up into a very nice trail bike. I'm thinking of getting most of my wife's bike parts and put them to this beast (she's rarely uses the bike anyway).

I've finished paying the frame, so the next step was to buy the suspension fork. Being an Intense frame, I believe it's blasphemy to install any fork other than a Fox. Now any biker who has been to an above average bike shop in the Philippines must know how expensive these forks are. For the amount of travel required for this bike frame, the estimated damage would be in the neighborhood of P40,000. Ouch.

It doesn't stop there. The Intense Tracer VP has a headtube size bigger than most mountain bikes - 1.5 inches to be exact. For maximum fork options, I need a Chris King Devolution headset so that I can use the standard 1 1/8". That's about P8,000.

As they say in Battlestar Galactica, "So save we all." (or something like that.)

But as with anything in life, there are trials to see what you're made of. Personally, I don't think they're bad. In a way, it actually make it clearer on what you value the most.

Sadly, the dream of the Intense Tracer is the casualty for this test. It has to end for now to give way to more important matters.

I'm selling the frame without any profit at all. Aside from the Fox Float RP23 shock installed, it also comes with a nice red Salsa seat collar and a Shimano XTR front derailleur. That's everything for P65,000.

Leave a message if you want to find out more. 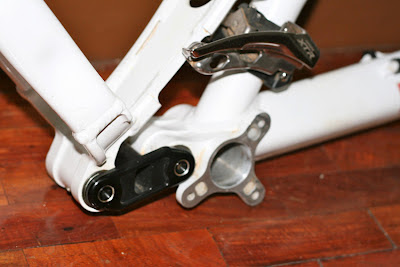 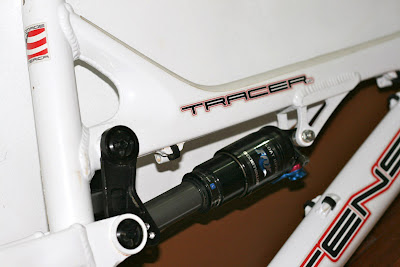 Unknown said…
Hi there is the frame still for sale?
12:22 PM

Ran said…
how much is that frame nowadays?